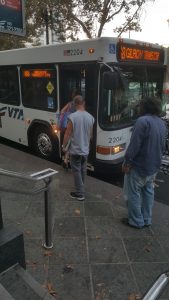 Public transit service in Silicon Valley – and throughout the nation – is in dire straits.  Many factors have caused large losses in ridership and fares for transit agencies like the Santa Clara Valley Transportation Authority (VTA) and other transit agencies nationwide.  Among these factors:

Also, lost revenue from sales taxes and gas taxes have caused VTA and other transit agencies in the nation to have large operating shortfalls.  One result locally: a proposal by VTA to reduce transit service by as much as 30%.  If approved, service reductions would take effect on February 8, 2021.

Read and learn how the COVID-19 pandemic has affected VTA and other transit agencies nationwide.  We’ll also have ways people like YOU can help prevent massive service cuts that VTA is proposing now.

In April, the Trump administration awarded $25 billion dollars in emergency aid to transit agencies nationwide.  That aid served to help with their budgets after the onset of the COVID-19 global pandemic in the United States.  VTA received its share of $73 million later that month.

That funding helped transit agencies like VTA keep a basic transit network working.  It also helped them increase cleaning aboard their bus and train fleet to help stem the spread of COVID-19.  More on VTA’s cleaning effort during the COVID-19 pandemic will be published in a separate article.

As of now, that funding Congress awarded is drying up.  As a result, many transit agencies nationwide got together to ask Congress to provide another $32 billion in additional financial aid in the next COVID-19 relief package.  A story in the San Francisco Examiner from August 5 describes the state of public transit funding in Congress:

Lawmakers have been in a stalemate over relief package negotiations for weeks, sparring over items such as unemployment insurance benefits, school funding and the U.S. Post Office.

The HEROES Act, passed by the Democratic House in May, included $15 billion for transportation funding, but it’s been held up in the Republican-controlled Senate.

A competing proposal from Senate Republicans includes $1 trillion in total relief, with no money explicitly set aside for transit.

Last week, 106 congressional representatives penned a letter to leadership advocating for a minimum of $32 billion to safeguard the future of public transportation.

How much funding the Bay Area would receive and how it would be divvied up between agencies remains unknown, but the Metropolitan Transportation Commission would oversee the process.

Currently, there is still no progress in Congress yet on a second COVID-19 relief bill that would help public transit, amongh other things.

How lack of federal public transit funding would affect transit riders here – nationwide and locally is detailed below.

Here’s what other transit agencies nationwide are proposing due to lost revenue and ridership from the COVID-19 pandemic.

The next section details how this crisis has affected Bay Area transit agencies.

“This is inevitable,” said Randy Rentschler, legislative director for the Metropolitan Transportation Commission, which manages bridge tolls and funds transportation projects throughout the Bay Area. “It happened with MUNI, it’s happening with AC Transit. It’s going to happen with every single transit operator throughout the Bay Area. The question is when will they do it, and how deep will the cuts be.”

“The cuts we’re making are terribly painful,” [SFMTA agency directory Jeffrey] Tumlin said during Tuesday’s meeting, adding that the agency is planning for a $200 million loss in the latest budget.

That will translate into 40 of San Francisco’s 68 bus lines being cut, possibly permanently, after being put on hiatus at the beginning of the shelter-in-place orders. And at the very least, those 40 bus lines will probably remain suspended for the next two years.

Tumlin likened what the SFMTA will be doing over the next two years as it begins to restore service to “living on our credit cards,” and he added that “We fall off a financial cliff in 2022.” 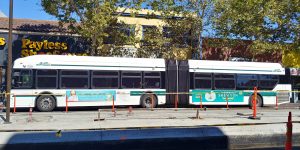 In Oakland and the East Bay, AC Transit could cut up to 30% of its bus service next year, due to shrinking revenue.  This story in the San Francisco Chronicle from July 6 summarizes the impact bus service cuts would have in the East Bay.

The agency stood to lose $5 million a month in forgone fares, and up to $80 million from dwindling sales tax revenues.

“I’ve had people contacting me saying, ‘I’m disabled, and they’re going to cut my line,’” said Darrell Owens, a housing and transit advocate in Berkeley. Owens doesn’t drive, so he relies on the bus to go grocery shopping or visit family. Last week he founded the group East Bay Transit Riders, partly out of anger that AC Transit had halted bus service at 7:30 p.m. during the George Floyd protests to comply with county curfews.

The final plan will be voted on by the AC Transit Board of Directors next year.

As for Caltrain: a 1/8-cent sales tax to help save that transit system will be put up for vote in the counties of San Francisco, San Mateo, and Santa Clara on November 3.  Read this story from the San Mateo Daily Journal from back in May on how the COVID-19 pandemic has affected ridership and revenue at Caltrain, as well as SamTrans.

Here’s some information that documents how the COVID-19 pandemic has affected VTA ridership and revenue.  It also includes what VTA is proposing in terms of more service cuts. 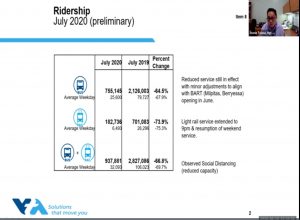 According to a report from ABC 7 News Bay Area, VTA has lost 80% of its overall transit ridership since the shelter-in-place orders statewide were given back in March.

As of May 2020, VTA is losing up to $18 million a month.  This included $3.25 million in fares (before VTA began collecting fares again in August) and $15 million in lost sales tax revenue. 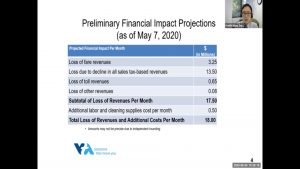 VTA’s current proposal, if approved in December, would cause up to a 30% reduction in public transit.  Three (3) forms of that proposal will be put up for your comment at meetings later in September.  Here’s a brief breakdown of what VTA is proposing:

According to VTA, the two best of the 3 plans proposed

The worst of VTA’s proposals

A history of VTA’s ridership performance and current spending priorities are in the next section.

VTA’s ridership drops go before the COVID-19 pandemic.  This is documented below.

Here’s a chart we and a fellow neighborhood group put together which documents VTA’s ridership drop over the years. 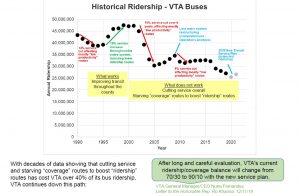 Where Your Money Has Been Lately

The charts below show how much VTA relies on sales tax revenue locally and from the State for its operating revenue.  This is compared vs. other transit agencies in the Bay Area and throughout California. 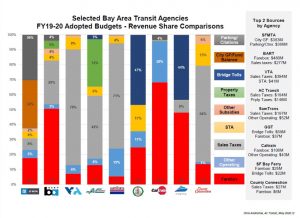 Here’s an explanation of why VTA’s fare box recovery is only 7% of its total revenue:

High labor cost due to Silicon Valley, low usage due to higher income and poor people priced into areas where they need to drive in, light rail that is excessively slow and useless due to business patterns, unreliability due to said labor shortage

Not helping matters: their spending habits.  Information from VTA’s spending in Fiscal Year 2019 on 2000 Measure A revealed the following:

These expenditures are further documented here.  Note that they reflect the priorities currently at VTA.   Recall that 2000 Measure A also promised increases in bus service and the fleet, in addition to BART:

Purchase Zero Emission Buses and Construct Service Facilities
Provide funds to supplement federal funds to expand and replace existing VTA diesel bus fleet from current size of just over 500 vehicles to 750 vehicles with the new zero emission buses and to provide maintenance facilities for this new, clean vehicle propulsion system. All new buses to be low floor fo easier boarding by seniors and the disabled.

How many service cuts and even fare hikes would have been prevented all these years, if VTA spent more on buses than it has BART?

The next section details what we all must do to have VTA and others help save public transit.

What You MUST Do To Save Public Transit

More than ever before, everyone here must start knowing

In other words, YOU, me, and our neighbors must be become more involved politically in terms of public transit issues.  This goes double if you depend on VTA for getting you to work, school, medical appointments, or vital shopping.

Below are ways we can all get more politically involved in saving public transit.

At the national level, the fastest way to tell Congress to save public transit: visit savetransit.info and fill out your contact information.  Filling out the form only takes 1 minute.  That form sends a letter directly to the U.S. Senators and House of Representatives.

In Oakland or the East Bay? Work with the East Bay Transit Riders Union to help keep AC Transit running.

Make time to attend the VTA online teleconferences in the next 2 weeks where their staff will discuss the proposals.  Here’s information on how YOU can take part:

Both meetings, upon clicking the RSVP, have information on how to participate from the comfort of your own home.

The VTA’s Board of Directors have already taken some steps to get more revenue to keep transit running.  At the September 3 Board of Directors’ meeting, the Board approved a deal that could make at least $7.5 million yearly to sell corporate naming rights for bus and light rail stops and lines.  This is documented in this photo: 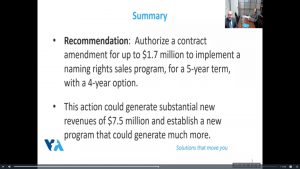 On September 18, VTA’s Board of Directors held a workshop to discuss the service cut proposals.  Despite being held at 9am that morning, over 50 people spoke urging VTA to do whatever it takes to save public transit.  One suggestion: spend more money from 2016 Measure B to prevent service cuts.

We did it!!! We got the referral that we needed to get the Measure B front-loading analysis internally so that we can save transit!!!

TY to everyone who spoke!!! pic.twitter.com/bw6Wd25e8w

Supervisor Chavez, CM McAlister, CM Rennie, CM Carr, and CM O’Neill (alternate) specifically said that they wanted the analysis. There were also good comments from CM Carrasco, CM Peralez, and CM Bruins in support of providing as much service as possible for our communities.

Contact the VTA Board Member for your city or your part of the County.  A list of VTA Board Members, their email addresses, and phone numbers are here. Let them know how much public transit means to YOU.  Also, ask them to support front-loading Measure B funding – funding voters approved in 2016 – to prevent these proposed service cuts.

Here’s a comment I made during the September 18 VTA workshop that sums it up:

You have a good chance of ensuring that transit service cuts do not happen in Silicon Valley.  That can’t happen when you don’t make the time and effort to let VTA staff and decision-makers know.  Better only happens when we all work together.  Let’s all make that better happen.

Roland Lebrun and Monica Mallon contributed to this report.