This public transit guide is being written as a public service for fans wishing to see San Jose Earthquakes soccer at the new Avaya Stadium. The new stadium is located at 1123 Coleman Avenue in San Jose, across the street from the airplane hangars of Mineta San Jose International Airport.

Plan on arriving to Avaya Stadium at least one (1) hour before the scheduled kickoff or event start time, in order to beat the traffic.

Note that this transit guide is NOT endorsed officially by the San Jose Earthquakes, Caltrain, VTA nor any agency in any way. As with all of our transit guides, it is written as a public service. In addition, we are not responsible for anything that occurs on VTA buses or trains, or on any public or private property as a result of use of this guide.

From San Francisco and the Peninsula

After getting off Caltrain, walk to the right of the brown train shed (going to the rear of the train) onto Railroad Avenue for about 50 yards until you see a bus shelter. DO NOT CROSS RAILROAD AVENUE! At that bus shelter (near the corner of Railroad Avenue and Benton Street, take VTA FREE 10 Airport Flyer bus to Avaya Stadium.

The 10 Airport Flyer bus stop for Avaya Stadium is the last stop before the Airport terminals.

Take the VTA’s 60 bus line (going to Great America) and get off at the Santa Clara Transit Center.  From where the 60 bus drops you off at, walk across the street to the Santa Clara train station area. Follow the instructions above to find the bus stop for and transfer to the VTA FREE 10 Airport Flyer bus to Avaya Stadium.

From the South (South San Jose, Morgan Hill, and Gilroy)

From South San Jose and points south, take any Alum Rock-bound VTA light rail train to the Santa Clara street light rail station in Downtown San Jose.  From there, walk across Santa Clara Street to the bus stop at the northeast corner of N. 1st and Santa Clara Streets and transfer to a Palo Alto-bound 22 or 522 Rapid bus to Santa Clara Caltrain station/transit center  From the Caltrain station, either walk/bicycle to Avaya Stadium via the station pedestrian tunnel or take VTA’s 10 Airport Shuttle bus to Avaya Stadium. 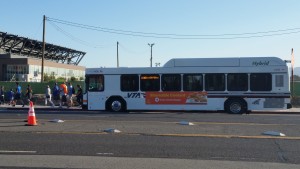 Take any Santa Teresa-bound or Winchester-bound VTA light rail to the Metro/Airport light rail station.  Then, transfer to the 10 Airport Shuttle and take it to the very first stop after the Airport, which is where Avaya Stadium is.

From Milpitas and the East Bay

To the Earthquakes’ Training Facility

Around the Fourth of July holiday, the San Jose Earthquakes host the L.A. Galaxy in soccer action at Stanford Stadium. This game is part of the “California Clasico” rivalry between the two soccer teams. The halftime show features a salute to our Armed Forces. After the game ends, there is a fireworks show that usually starts around 10pm.

Also note that Stanford Stadium stop has no manual wheelchair lift as other stations do.  Make sure to ask the conductor for use of the on-board wheelchair lift when boarding or alighting Caltrain.