Also, check out this user advisory from Twitter for Monday evening’s championship game:

And with the 90% rain forecast tickets should drop. If you want to sit in the rain. And fight horrible traffic. Go EARLY via @vta light rail to Levis. #CFBPlayoff

According to VTA, Children’s Discovery Museum station will be closed from noon January 4 thru the morning of January 7.  This is because of the crowds expected at events at Discovery Meadow.  Use Convention Center station instead for boarding light rail in all directions in the area this weekend.

Fortunately, all of the fan events in downtown San Jose are only a 5-10 minute walk from where VTA buses like the 22 and 23 local buses, 522 Rapid, and 323 limited stop will be detoured.

Three (3) days of music celebrating college football and its championship game will take place at Discovery Meadow Park.  Performers Alessia Cara and Brynn Elliot kick off the festivities on Friday.  Closing the music festivities on Sunday will be performers like OneRepublic and Elle Goulding.

Discovery Meadow Park is on W. San Carlos Street and Woz Way in downtown San Jose.  It’s served by VTA’s 23 local and 323 limited stop bus lines.  As the Children’s Discovery Museum station will be closed, use Convention Center light rail station and walk two (2) blocks west to Discovery Meadow Park and the music festival.  Our transit guide to the Park has more details.

“The Quad” is where you will find the college football championship team store, concessions, and other activities.  It will be set up at Plaza de Cesar Chavez from Friday thru Sunday.  The same VTA bus and light rail service for the Convention Center can be used to get to “The Quad” as well.

Events On January 5 Only

On Saturday morning, starting at 8am, “Media Day” events at SAP Center in San Jose will take place.  SAP Center is at 525 W. Santa Clara Street in downtown San Jose.  There, the press – and even fans – can interview players and coaches from Alabama and Clemson on what to expect for the championship game Monday evening in Santa Clara.  Media Day is FREE and open to the public.

Our public transit guide to SAP Center lists VTA bus, light rail, and even commuter rail options to and from Media Day.  They will help you beat traffic and parking hassles expected Saturday morning at SAP Center.

This 5K/3.1 mile walk/run is being run and open to the public, to allow fans to experience downtown San Jose.  Read up on the route here, with the race starting at 8am.  Proceeds from the 5K benefit teachers’ foundations.

Read our transit guide to downtown San Jose to obtain VTA bus and light rail options for spectating or participating in the race.  Also, several VTA bus lines serving downtown San Jose like the 23 and 522 Rapid will be detoured to accommodate the race.  Learn how you may be affected Saturday morning here.

Events On January 6 Only

The Tech Museum Of Innovation

On January 6 from 7pm-10pm, fans and championship game attendees can sample food from over 20 Bay Area gourmet chefs.  Read up on information about this event.

The same VTA bus and light rail options for the Convention Center can be used to get to and from the Tech Museum.  It’s located at Park Avenue and South Market streets in downtown San Jose, next to Plaza de Cesar Chavez and “The Quad” setup for this weekend.  Register with tickets for the food sampling here.

It will be best to plan on arriving at Levi’s Stadium at least two (2) hours before the 5pm kickoff.  This way, you avoid any last-second rush to avoid missing the kickoff.

From 10am until 4pm, fans with game tickets only can access the Tailgate Party in the parking lots of Levi’s Stadium in Santa Clara.  There, fans can enjoy cooking, play interactive games, use a “zip line” for fun, and enjoy a pre-game concert from Keith Urban.  Upgraded tailgating options are also available.

Caltrain will run additional service from San Francisco to and from Mountain View.  At Mountain View, transfer to VTA light rail and exit at the Great America stop, a 2-minute walk to/from Levi’s Stadium.  Staff will be on hand at Mountain View to help you with the transfer.  VTA will run regular service before and during the game, with increased light rail service after the game ends.  The last Caltrain will leave Mountain View 75 minutes after the game ends.  Read up on how VTA will serve the college football championship game – especially on game day – here. 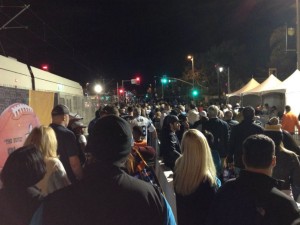 At the end of the championship game, follow signs and instructions from staff to take VTA buses and light rail back to your final destination.  It will prove important to know and plan your transit trip ahead of time.

In addition, Amtrak’s “Capitol Corridor” will move one evening train to depart later than usual.  This train, 548, will depart the Great America station at 9:20pm, arriving in Sacramento just after midnight.

Attending the #CFBPlayoff #NationalChampionship? Avoid the traffic slog & take the train direct to @LevisStadium! We've rescheduled Train 548 for a later departure so you won't miss any of the action btwn @ClemsonFB & @AlabamaFTBL. #BayArea2019 https://t.co/uuDTX4MX83

It is hoped that this transit guide will help you beat traffic gridlock, parking hassles, and road rage to and from this coming weekend’s events.  The additional information in this guide, it is also hoped, will help bring awareness of and increase ridership on public transit in Silicon Valley.

Stay safe and sane, and have fun on this championship weekend.