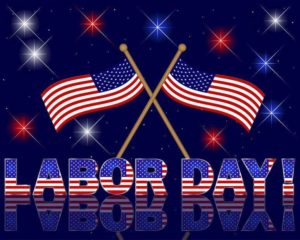 On behalf of the Silicon Valley Transit Users, I want to wish everyone a Happy Labor Day.  Today, let’s honor the working people who help make this country great.

All transit agencies in Silicon Valley such as VTA, Caltrain and SamTrans are running on a Sunday/Holiday schedule today. In addition, there are no Altamont Corridor Express (ACE) trains between Stockton and San Jose today.  Normal transit service will return on Tuesday.

Please stay safe and sane today while we all celebrate the working class people in our country today. 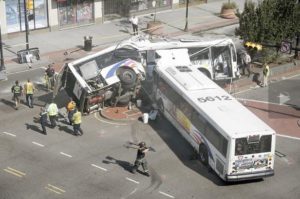 Early Friday morning, two New Jersey Transit buses crashed into each other in downtown Newark, NJ. Two people – including the driver of one of the buses – died as a result of the crash.  Seven bus passengers are in critical condition at a nearby hospital.

According to the Associated Press (AP), investigators are determining whether the bus driver killed in the crash ran a red light.  The same AP report mentioned that the intersection the bus crash occurred was one of the first in New Jersey to feature surveillance cameras that caught red light violators. That surveillance camera program was discontinued in 2014 amid controversy.

Later on Friday, in downtown Palo Alto, a Santa Clara Valley Transportation Authority (VTA) bus jumped the curb and hit some newspaper racks after making a right turn.  While Palo Alto Online reported that no one was , it is rather interesting to note that the driver was allowed to continue the route on another bus.  This is something worth asking VTA, I have never heard of this practice after an incident involving a bus and passengers.

On behalf of the Silicon Valley Transit Users, our condolences go out to the hurt and perished in the Newark bus crash.

Due to construction at the County Supervisors’ office, today’s VTA Board of Directors meeting will be at the Auditorium at VTA headquarters, 3331 N. First Street (near River Oaks) in San Jose.  The meeting will start at 5:30pm as always.

Among the agenda items to be discussed at today’s Board of Directors meeting:

Can’t make it to tonight’s Board of Directors’ meeting? Watch the Board meeting activities online.

Come join me at 5:30pm to help make VTA accountable to every citizen. Including YOU.

Starting at 9am, you van watch the VTA “Envision Silicon Valley” workshop here.

This Friday morning promises to be an event for public transit in Silicon Valley. Then, in San Jose, members of the Valley Transportation Authority’s Board of Directors will discuss what will go into a proposed sales tax ballot measure in November. (Adobe Acrobat PDF Document)

Take any VTA bus, light rail or Caltrain? Learn how YOU are affected by the proposal by reading this article from Adina Levin of Green Caltrain.

The VTA Workshop will be webcast LIVE to the public starting at 9am on Friday.

If at all possible, join us to ensure VTA continues to build a proper transit system for everyone in Santa Clara County – including YOU.  Remember: it will be (more) sales tax money from YOU that will be spent on these transit projects.

DISCLOSURE: Our group is one of the stakeholders of the Envision Silicon Valley effort.