The biggest concert weekend of the year takes place this weekend in the Bay Area.  Several huge concerts and music festivals will take place in San Francisco, Mountain View, and San Jose.

Expect standing room only (SRO) conditions on Caltrain from Friday thru Sunday.  This is because fans traveling to and from these concerts will be riding with normal commuters.

This guide will show you bus and rail options to help you beat traffic gridlock and parking hassles at these events.  Options even detail some private shuttle bus options to and from these events. 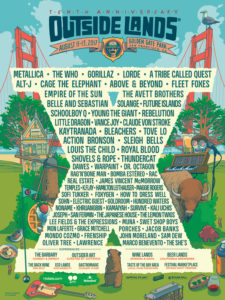 The tenth anniversary edition of Outside Lands takes place this weekend at Golden Gate Park in San Francisco.  Amongst the musical artists headlining Outside Lands this year: Metallica, The Who, Lorde, Gorillaz, and A Tribe Called Quest.  (As of this writing, all tickets to Outside Lands are

From Friday thru Sunday, in and around Plaza de Cesar Chavez in downtown San Jose, this year’s San Jose Jazz Summer Fest takes place.  Ten stages of jazz, blues, Latin, salsa, and rhythm and blues music will play indoors and outdoors for your pleasure.

Musical acts featured this year include Chris Botti, George Clinton and Parliament Funkadelic, and The Whispers.

Our transit guide to downtown San Jose gives you Valley Transportation Authority (VTA) bus and light rail service to and from the Plaza de Cesar Chavez area.  It saves you from traffic gridlock and parking hassles in the process.

Mother Monster visits the City By the Bay this Sunday.  Touring in support of her latest album, “Joanne,” Lady Gaga will have her concert at AT&T Park in San Francisco on Sunday starting at 7pm.

Caltrain will run its usual weekend service between San Jose and San Francisco before the concert.  After the concert, Caltrain is expected to run extra service from San Francisco, with trains making all stops to San Jose.

As most music concerts at SAP Center end around 11:30pm, check out our late-night SAP Center transit guide.  It gives you late-night bus options to help you get to and from the concert, letting you beat traffic gridlock and parking hassles in downtown San Jose.  This will be especially useful given that the San Jose Jazz Summer Fest will be taking place simultaneously at Plaza de Cesar Chavez.

Getting the evening kicked off here @837NYC!! pic.twitter.com/NcYgq8RLA5

For both concerts, the private Rhythm Shuttle service can take you to and from Shoreline Amphitheater.  Make sure to reserve your seat on this private bus as soon as possible.

Stay safe this weekend, and rock on!