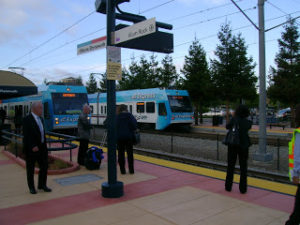 Nearly eight years after its introduction, express light rail trains in San Jose will be no more.  At its August 2nd meeting, the Santa Clara Valley Transportation Authority (VTA) Board Of Directors voted to end the express trains as of October 8 of this year.  The decision, according to VTA, is being done to save between $720,000 and $820,000 of operating expenses.

During the discussion (starting at 1:21:00 of the video stream), VTA staff revealed that the express light rail trains had 538 total riders per day, at a cost of $5.98 per rider.  The express light rail service consisted of three (3) northbound trips in the weekday morning rush hour, and three (3) southbound express trips in the weekday evening peak rush hour.  The express light rail trains, when in service, skipped stations between Children’s Discovery Museum in downtown San Jose and Ohlone-Chynoweth in southern San Jose.  Time savings, according to VTA, was about 4 minutes.

VTA Board Member (and San Jose City Councilmember) Johnny Khamis wanted staff to review the efficiencies of the express light rail service at a later date. (at 1:32:25 of the video stream).

What Some Of the Public Had To Say

Public comments on the proposal to discontinue the express light rail trains start at 1:33:40 of the video stream.

John Rainville argued how the express light rail trains are needed so that people don’t have to wait as long – especially in wet weather.

Aboubacar “Asn” Ndiaye from Working Partnerships USA expressed some concerns that VTA staff did not provide a clear impact on how the ending of express light rail trains would result in overcrowding on other trains.  He also expressed concern that this process should be part of the “Financial Stability” committee process and not separated.

Roland LeBrun the express trains bypassed poorer areas like Capitol, Curtner, Tamien (where some Caltrain “baby bullet” trains serve). Expressed this as a “Title VI” civil rights issue. Also expressed frustration seeing an express train stop at a red signal at Tamien, and seeing passengers being unable to board the stopped express train.

Here’s what others had to say on the proposal on Twitter:

#HelloVTA – On the 7:19 express out of Santa Teresa and the bike rack in the first car filled up by the first stop (Cottle). That isn’t a complaint – just an observation of the value of this train (and what people do to have a green commute in the #BayArea). @VTA pic.twitter.com/jwS6WQFgcz

You are a good organization and provide a needed service, but keeping the express train or increasing service isn’t just about trains, it’s language. It’s telling people ‘this is here. You can leave your car and use it.

These "express" trains run between regular trains, which have 15 minute headways. The only benefit to "express" trains is that a lot of the "less-than-savory" riders don’t use them because they bypass certain stations, making them ideal for” gentrified"riders #alienategentrified

This Twitter thread sums up my feelings on VTA’s proposal to end express light rail:

While I get that VTA is trying to same up to $820K in our tax money to cover its $20 million operating deficit, I did not see any lessons learned documented by staff on implementing this service, since 2010.

For instance, I saw sparse info on TV, radio, and print regarding the express trains. Perhaps more would have ridden it had people known about it.

Of course, the riding public must do a better job in picking up litter after themselves aboard @vta buses and light rail. It's what we were taught in school and at home.

Some history documenting VTA’s Express Light Rail is in the next section.

What’s Related To This Story?