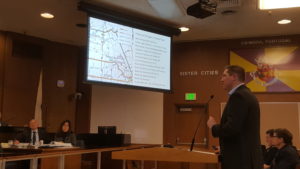 The week of February 12 will be of note in parts of San Jose and Gilroy.  The Santa Clara Valley Transportation Authority (VTA) will hold the last three (3) public meetings for its “Next Network” transit service restructuring proposal on Feburary 13, 15 and 16.  The meetings start at 6pm and last about two (2) hours.  VTA has published additional information on your input regarding the “Next Network” so far.

Not only do we have talking points and site information for these three meetings the week of February 12, we also have additional news that has come up.  More information follows…

Here are the dates and locations for the last three VTA public meetings for its “Next Network” proposal:

All of these public meetings start at 6:00pm.  Based on those who attended prior meetings, these meetings last no more than two (2) hours.

Meeting Talking Points You Can Use

These were all discussed on our email list over the last few days regarding the VTA’s “Next Network” service restructuring proposal.

Future Ideas and Other Questions

Other “Next Network” News

Students successfully lobbied the Board of Trustees of the Foothill-DeAnza College District to recommend that VTA restore a bus route linking Foothill and DeAnza Colleges in Los Altos and Cupertino, respectively.

On February 1, the Saratoga City Council hosted a presentation by VTA re: their “Next Network” service restructuring proposal. View video of that presentation here:

The presentation starts at 16:00 into the video.  One of our newest members, Jim Stallman, comes up at 51:45 of the video. He talks about the need for the only bus line linking Saratoga to Caltrain (the 53). He also expressed concern on the proposed elimination of limited stop buses serving Lawrence and San Tomas expressways (328 & 330), as traffic gridlock increases on them The Saratoga City Council voted to send a letter to VTA asking to keep the 53 bus line. The 53 bus line links the West Valley College area to Caltrain in Sunnyvale. A BIG thank you to Mr. Stallman for speaking up in Saratoga on the 1st.

I personally went to the Santa Clara City Council meeting, where VTA made a similar presentation. Audio of that presentation – and my responses to it – can be heard below.

As part of my testimony, I also invited Councilmember Teresa O’Neill (who’s on the VTA Board) to come to our next group meeting on February 28 in San Jose.

We’ll be working on a formal letter to send to VTA regarding their “Next Network” proposal.  Look for that letter to be posted here next week.