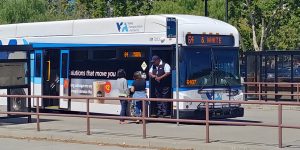 Ever notice your bus or light rail train did not show up as scheduled in Silicon Valley lately?  One reason: the Santa Clara Valley Transportation Authority (VTA), along with some other transit agencies in this country, is experiencing a driver shortage.  Yet, as of today, no official notice from VTA advising people on this has occurred.  This is a follow-up to a post from October on VTA’s driver shortage.

On October 28, I received a reply from Lucas Perez, Customer Service Supervisor at VTA.  He noted what VTA is doing to address the driver shortage.

VTA is addressing this issue in two ways. First, to address the open positions, we have a trainee class, which lasts nine weeks, nearing completion with 20 potential graduates. Our next Operator trainee class is scheduled to start on October 23rd with 28 potential new trainees who will go through the 9-week course, putting them behind the wheel at the end of December. We are working to fill the vacant positions by the end of this year. This is an ongoing effort.

A week earlier, I was interviewed for a story in San Jose Spotlight on VTA’s driver shortage, and the lack of communication to the public about it.  I pointed out that VTA has the technology now to make notifying the public about cancellations due to their driver shortage.  Such lack of notification, as I also pointed out, destroys the credibility of all printed schedules, online schedules, and real-time information at bus stops. 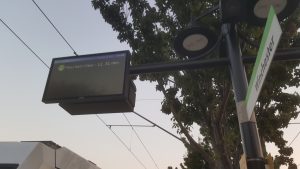 At the November 7 VTA Board Of Directors’ meeting, VTA staff gave a presentation on what is being done about the driver shortage. Here’s a 20-minute presentation from that meeting:

They clearly heard from us, and from riders like YOU, on no-show buses and light rail trains.

Before the December 5 VTA Board Of Directors’ meeting, I sent a follow-up letter to Mr. Perez, VTA management, and VTA General Manager/CEO Nuria L. Fernandez.  In that letter, I pointed out that VTA was coming off a hiring freeze of nearly 2 years, per an interview with John Courtney of ATU Local 265.  I also challenged VTA that if Metro St. Louis can inform transit riders of its driver shortage, what stops VTA from doing so?

Evidently, that letter was enough to have Ms. Fernandez personally call me at 11am that morning.  Her phone call surprised me.  It marked the first time any VTA General Manager – from Peter Cipolla to Michael Burns and now Ms. Fernandez – had ever called me directly.  I politely asked her to state the information she was giving to me publicly, as I don’t do “off the record” talks.  The result of that, was this presentation between 2:20 and 5 minutes of her General Manager’s report:

At about 3:50 of the audio, one fact that Ms. Fernandez points out:

She also mentioned that notices in VTA’s “Take One” pamphlets explaining the driver shortage will be published.  She also pointed out that VTA will use other means to communicate to those who don’t have access to social media.

Given that VTA has now rolled out its biggest bus and light rail service changes in years, this will be something we must continue to monitor.  We will see if VTA truly heard us in terms of telling the public on its driver shortage.