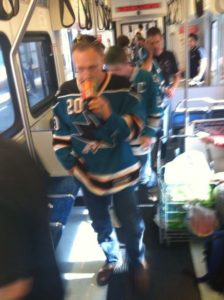 This weekend in the Bay Area has championship events that are being seen worldwide. From Stanley Cup Finals games 3 and 4 in San Jose, to the NBA Finals in Oakland on Sunday, to the Copa America Centenario games in Santa Clara, the world is watching the Bay Area sports scene.

This post details the bus and rail options available for these big time sporting events.

Saturday night was the first time San Jose’s SAP Center has hosted a Stanley Cup Finals game. It was a memorable game which the Sharks won over Pittsburgh 3-2 in overtime.

To give you an idea of the worldwide media coverage the Stanley Cup Finals receives, here’s the television call of the winning goal from Game 3:

Game 4 of the Stanley Cup Finals will be held on Monday at 5pm at SAP Center, 525 W. Santa Clara Street in San Jose. There will be a street rally and light show before Game 4 near the building, starting at about 2pm.

SAP Center is across the street from San Jose Diridion Station.  There, many VTA bus lines, light rail, and commuter systems like Caltrain are a 5 minute walk away from the venue.  These options are details in our transit guide to the SAP Center.

Also, make sure to visit the Sharks’ practice facility at Sharks Ice at San Jose.  Sharks Ice is at 1500 South 10th Street (corner of Alma) in San Jose. Our transit guide to Sharks Ice shows several VTA bus lines that stop within a short walk of Sharks Ice.

On Sunday at 5pm, the Golden State Warriors host Cleveland in Game 2 of the NBA Finals.  The game takes place at Oracle Area, behind O.co Coliseum, in Oakland.

Our transit guide to O.co Coliseum shows BART, connecting VTA express bus service to and from the game.

For the first time in its 100-year history, the Copa America soccer tournament is being played in the United States.

Levi’s Stadium in Santa Clara will host two more matches – in addition to the opening game last Friday – tomorrow (June 6) and 13 at 7pm.  It will also host a quarterfinal match June 18 at 7pm.

Our transit guide to Levi’s Stadium features Caltrain, connecting VTA light rail, and VTA buses serving these games. We will attempt to have updated information on additional VTA and other buses to the games, as facts warrant.

As we root these teams to championships, stay safe and have fun on the buses and trains this weekend.