Read on for more of what happened at this Board meeting…

More on the December 5 VTA Board Meeting

A December 7 article in San Jose Spotlight chronicled much of what happened at the VTA Board Of Directors’ meeting.  Our group, and supporters from the Silicon Valley Youth Climate Action, were surprisingly backed up by a letter from Congress member Ro Khanna (CA – 17th District) to VTA earlier that day.

Thank you @RepRoKhanna for writing a letter of fair consideration in support of the needs of the over 12,000 students @SJSU who ride VTA buses and light rail! pic.twitter.com/BZoK3sZFmd

As that San Jose Spotlight article points out, in his letter to VTA, Khanna wrote:

“Santa Clara County expects continued population growth that cannot be matched by just expanding roadways,” the congressman wrote in a letter. “Shifting bus lines from overall coverage to ridership corridors can have negative impacts on those with low incomes, persons with disabilities, the student population and the elderly population. Reversing VTA’s recent reductions and increasing bus service will benefit riders and decrease the severe congestion on San José roadways.

Together, we continued to push the VTA Board to increase funding for running more bus and light rail service in Santa Clara County.  Over 35 speakers – myself included – expressed this need to all VTA Board members and staff.

Other Goings-On At the December 5 Board Meeting

Until the BART extension into Milpitas and Berryessa opens, the 181 express bus will still run between downtown San Jose and the Warm Springs BART station.  However, the express bus will no longer serve the Great Mall Transit Center, instead stopping at the I-880/Alder light rail station.

The 500 bus will only run between San Jose Diridon Station and the San Jose State University area, until Berryessa BART station opens. 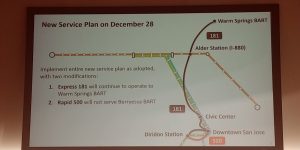 Info from VTA on how the 181 and 500 bus lines will run from December 28 until after the BART extension to Milpitas and Berryessa opens.

VTA Staff made a follow-up presentation on what is being done to address the agency’s driver shortage.  I sent an additional letter to VTA to follow up on our prior story.  Full details will be provided in a separate article.

County Supervisor Dave Cortese called for VTA Staff to assemble a resolution to call for a climate emergency for the January 9, 2020 Board meeting.

Rumor has it that the VTA Board Meeting for January 9, 2020 will take place at VTA Headquarters and not the usual County Supervisors’ Chambers.  More details will be available as soon as we receive word.