There will be follow-up on issues such as

See you on Thursday!

An explosion and fire at the former KNTV television studios at Park and Montgomery occurred about an hour ago. As of 4:30pm, the San Jose Fire Department declared it a “five-alarm” fire.

Three (3) bus lines – VTA’s 64 and 65 bus lines, and the Highway 17 Express bus line – all run past and stop at the former studios. The explosion and resulting fire has also caused rerouting and delays on these bus lines as firefighters put out the blaze.

Two other notes: the fire is yards away from VTA light rail and railroad tracks used by Caltrain, Amtrak and Union Pacific freight. No word yet on whether or not rail services have been affected. The blaze is also across Park Avenue from the San Jose Fire Department’s training headquarters on Montgomery.

Group member David Lytton of Campbell took this photo after witnessing the explosion and resulting smoke before the blaze.

Follow @svtransitupdts for additional news on how transit info is affected by the fire, and when normal service will be restored. 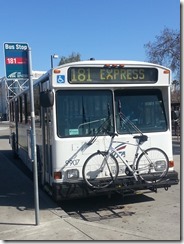 Details on the changes are after the jump.

END_OF_DOCUMENT_TOKEN_TO_BE_REPLACED

Yesterday evening, ten people died in a collision between a Silverado Stages tour bus and a FedEx semi truck on Interstate 5 in Orland. The area is 90 miles north of Sacramento.

The tour bus was filled with students and their chaperones headed to Humboldt State University on a campus tour. It was one of three tour buses headed to the campus. Those who perished so far are five students and five adults – including the drivers of the collided semi and tour bus.

Let all of us in Silicon Valley and nationwide mourn those who perished. Also, let’s keep those who survived in our thoughts and prayers.

(Apologies for the delay in posting this. There have been some personal issues I have had to deal with.)

At our group meeting last Thursday, we discussed the need to get the word out on being safe as a pedestrian. This issue is in light of recent and tragic incidents such as:

More on this particular incident in a later post. Meanwhile, read and understand these safety tips from Caltrain on how to cross railroad tracks – especially if you drive a car.

Lots of catching up to do…